CineFAM Shoptalk/Behind the Lens #5 – Love Through Our Lens

Grey Area follows Dre Nassir (Golden), an aspiring Toronto model, as she navigates the harsh reality of her professional life and is later forced to see her toxic ex of six years Amari Jones (Neké Andeh), for the first time since their breakup. 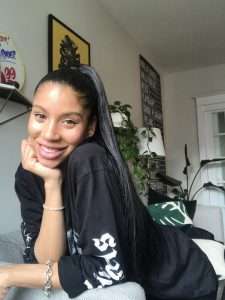 Keesha Chung is an emerging Toronto based filmmaker. After graduating from Concordia University with a BA in Women’s Studies, Keesha co-founded Collective Culture, a platform highlights the voices and experiences of BIPOCs through content development and programming. Before making her directorial debut with “grey area” she worked in film, media, content production, and the arts for over 10 years in a variety of capacities. Keesha began her career as a professional model and segued into working behind the camera as a producer, director, and writer, programming coordinator, graphic designer, event producer, and event moderator.